MDX is made for producing pivot tables.  In SQL Server Management Studio, someone will write MDX queries all day that produce pivot tables naturally.  However, when using some of these MDX queries in a SQL Server Reporting Services report, they’ll often run across this error:

The query cannot be prepared: The query must have at least one axis. The first axis of the query should not have multiple hierarchies, nor should it reference any dimension other than the Measures dimension.

SSRS can ONLY have measures in the first dimension.  That’s not how MDX queries are normally written.  Dimensions usually appear both in the rows and columns, and the measure is selected in the WHERE clause.  Previous methods have used cross joins in the rows or a pass-through query in SQL Server.  Both potentially degrade performance.  However, there is another method that can be used with SSRS, and it’s deceptively simple.

Use a third axis in your query.

While SSMS cannot display a third axis, SSRS can use a third axis in a dataset.  To select your typical pivot table data, simply select your desired measures on the first axis, your desired columns on the second and desired rows on the third.  If your original query looks like this:

Again, SSMS will not be able to display the results of the revised query, but it will work properly in Reporting Services. 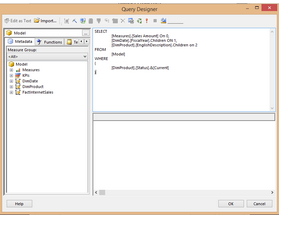 The fields show up in the dataset. 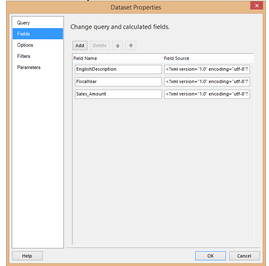 Place the fields in a simple matrix 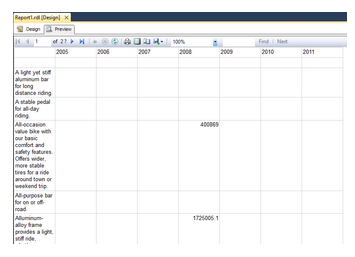 Here’s some execution times as captured by SQL Profiler:

We can see  the execution of the 3-axis query retains the favorable performance of the original. However, this dataset is just too small to give meaningful information.  If we increase the size by swapping FiscalYear to DateKey, we’ll get a little bit more information.

When that translates to our report, we see the following.  Frankly, the query in this case is not the major limiting factor, and the average improvement was a mere half-second.  More demanding queries should show a larger delta.

What can we conclude from all of this?  We can develop something more akin to “natural” MDX queries for use in SSRS using a third axis.  We can realize some performance benefits and better flexibility in our queries.  Finally, we can do that without any additional security or configuration hassles.  It should be a technique to keep in your mind when developing MDX based SSRS reports.